If you are like many fishermen who have begun using inflatable pontoon boats for fishing, you have probably noticed that, due to the unique construction and design of these boats, your existing or typical fish finder may not work as well as you think.

That is because some fish finders work better for inflatable pontoon boats than others do.

Some fish finders have unique SONAR and other capabilities that work best with the design of inflatable pontoon boats versus traditional metal-and-fiberglass boats.

The degree angle of the SONAR from your fish finder, how it may attach to your boat or remain hand-held, how deep the fish finder can detect, and other features not available on some fish finders can help turn an afternoon of fishing with your inflatable pontoon boat from you catching no fish, to filling up your coolbox with catches for days.

In addition, this product features Garmin's proprietary CLEARVU scanning sonar, which helps an inflatable pontoon boat fisherman see more of what is in the water around the boat.

This particular Garmin model also boasts high-image quality, and provides the user with detailed representations of fish -- and other objects under the surface of the water such as logs, debris, brush piles, etc.

The interface is simplistic, with various dedicated buttons so you don’t have to fumble around with a touch screen while on the water. .

It does come in multiple display sizes, although most inflatable pontoon boaters find the 3.5” screen with to be ideal.

This finder features Garmin's specialized waypoint maps which allow the inflatable pontoon boat fisherman to view and mark various locations in the body of water where you are fishing to recall and come back to later.

Its Garmin CHIRP SONAR sends continuous frequency sweeps, which gives the user a wider range of information about what is underneath the surface of the water around you.

This model also shows your speed, and the external temperature.

It comes with a transducer, as well as clamps to hold the transducer cable.

Easily upgradable and compatible with other Garmin technology, this model also allows the inflatable pontoon boat fisherman to upgrade the CHIRP technology--which is exclusive to Garmin, to allow for even more clear sonar images and target separation to show clearly what the depth of the surface floor is.

Its maximum SONAR depth of 1,600 feet in freshwater, and 750 feet saltwater are among the best in the industry. 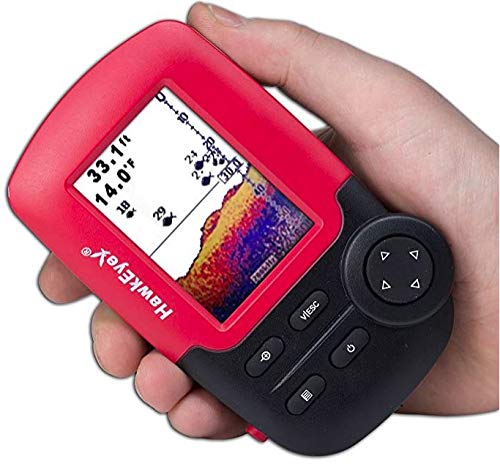 Although this unit has the second-smallest display of any of the best fish finders for inflatable pontoon boats, it still packs a punch when it comes to fish-finding technologies.

It features an ice-mode, which allows for use with ice fishing.

Either portable or boat mountable, this unit can be used by a pontoon boater either in hand or mounted for easy viewing.

Hawkeye's two-year product warranty is one of the longest in the business,

ITs 200kHz and 83kHz dual-beam sonar allows the user to customize the fish finder to adjust to any technique from fly fishing to ice fishing .

The 1C also fears multi-mode, which allows high-definition capability on the monitor, and a reduction of noise from SONAR echoes. 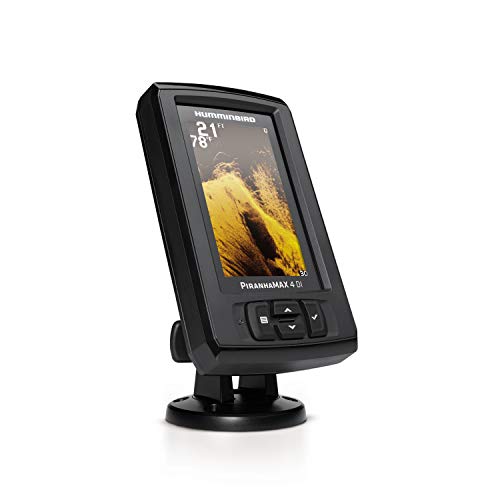 With a 4.3" display size, it offers one of the largest display sizes of fish finders that work well for inflatable pontoon boat fisherman.

It features down-imaging SONAR, and depth capability to 320 and 600 depending on water conditions.

This unit features Humminbird's proprietary FishID+ technology, helping you identify not only that there are fish near you, but what kind of fish they may be.

It's fish alarm won't let you nap through a school of fish passing your inflatable pontoon boat, either!

Its dual-beam sonar allows you to pick either a narrow or wide beam.

The color LCD display has more modern styling and gives you a much more detailed look at what is below and around your boat than other products ion the market.

While Garmin products may offer their proprietary Waypoint and GPS mapping technologies to allow you to come back to one location time and again, they simply don't have the display quality of the PIRANHAMAX. 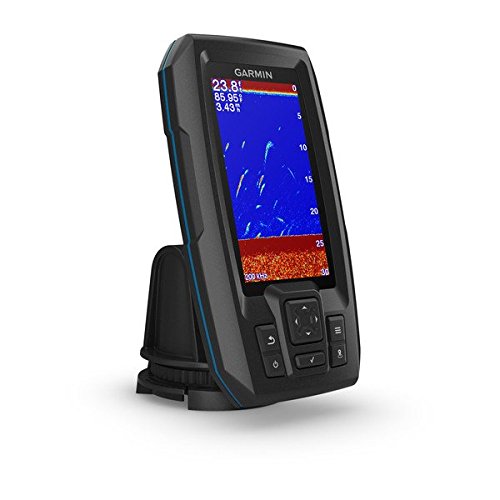 The Garmin Striker Plus 4 has several features designed to help the inflatable pontoon boat fisherman have a successful outing.

In addition to all of the typical proprietary Garmin features you've grown to love on other fish finders and the company’s in-car GPS units like waypoints and route creation, the 4.3" display, another of the largest in the industry, features quickdraw contour mapping.

This model, in contrast to the prior listed Garmin, actually lets you store waypoints, routes, and create 1' contour maps for up to two million acres of below-the-surface grounds! 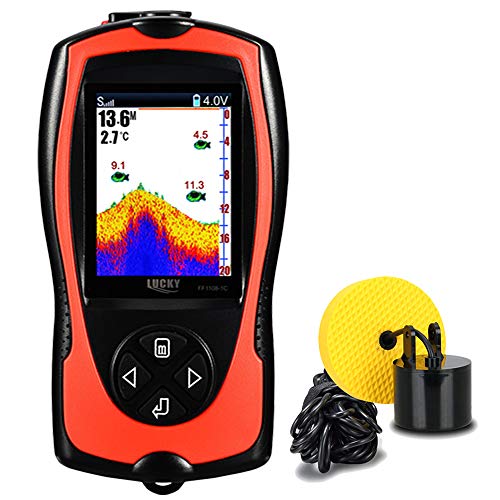 LUCKY’s hand-held portable fish finder offers many features for the inflatable pontoon boat fisherman. One caution, however, is that this is the only device on this list that doesn’t appear to have any compatible device manufactured to mount it to your boat. It advertises that it comes with mounting clips, but they are only guaranteed to work at the super-slow speed of five miles per hour!

Though it has among the smallest screens on this list, it does include a fish finder but with a TFT LCD color display.

It can display underwater contour, depth, and even water temperature and fish. Unlike other units, however, it simply puts a few cartoon fish on your screen rather than a SONAR image of what the fish may actually look like.

It comes with a USB cable for charging, and holds a charge for about five hours.

This model works well for any type of fishing, from ice fishing to deep-sea fishing, to fishing from the shore or an inflatable pontoon boat.

One great thing about this model is the sensitivity control. It allows you to control how many details are displayed on the map--you’ll want a lower setting for clear water.

Whether you decide to buy a pontoon boat or not, a fish finder is beneficial for any type of fisher, though because of how much they cost, you have to get it right. The experienced inflatable pontoon boat fisherman should consider a number of factors before purchasing any of the models on this list.

First and foremost, you must consider the type of water you are fishing in. If you are fishing in open seas, you definitely want a model with much deeper SONAR depth than some of those offered on this list. If you fish in shallow rivers or lakes, you may wish to sacrifice depth for detailed display.

Remember, too, that there are vast differences between the details offered on these displays. Some actually show you the contours of the fish under the water. Some, however do not. They just put a cartoon fish on the screen and you have to hope that the SONAR really spotted a fish and not a floating shoe.

You’ll also want to consider how important route mapping, GPS, and marking spots and saving them for another trip are to you. Two of these models offer all of that. Some offer only GPS. If you want to remember exactly where your favorite fishing hole is and have your fish finder take you there, then you may need to consider one of the Garmin models with their proprietary technology.

Interestingly, only a few of these devices actually tell you, the inflatable pontoon boat fisherman to what degree the devices are water rated. Remember that the better the water-rating, the more waste-resistant the device is. If you frequently take your inflatable pontoon boat in the surf or for deep-sea fishing, that water rating is far more important than if you are in a typically still lake.

Consider, too, whether or not the device you are purchasing has a warranty. For an inflatable pontoon boat fisherman, a fish finder is a serious investment.

Make sure that your investment is protected. If the manufacturer doesn’t offer a warranty, you may want to consider whether your boat insurance will cover the device, or if you can buy a third-party warranty.

A high-quality fish finder will make the difference between a fish fry after your day on your inflatable pontoon boat and eating at the nearest fast-food restaurant, so choose wisely.

Too, remember to make sure you are selecting the very best model that fits the places and manner in which you fish. Don’t be wowed by proprietary technologies or big displays if you feel another model can best suit your needs.